He’s a Contact Centre Agent by day, and a (not vigilante, no) sketch artist by night. For the 27-year-old gifted hands that he is, Brian Kawesa is surprisingly reserved, and not as outspoken as one would picture. Speaking of pictures, Kawesa is picking up a steady career in sketch art drawing, a nearly unheard-of industry in Uganda. It may be not be very common to us, but it isn’t something Kawesa’s fingers learned yesterday.

Born on 26th October 1990 in Kampala, Brian Kawesa first picked interest in the art in his Primary Three at Police Children’s School in Kibuli, a suburb of Kampala, when a student teacher assigned the class to draw anything they could.

“My friend’s big brother drew for him a man throwing a spear. The drawing was amazing, and I said to myself: I have to do that,” Kawesa says. “So I picked up a pencil and paper, and got down to it.”

Growing up, Kawesa has been surrounded by friends and family interested in art. As a little boy, he looked up to his cousin Eric who was gifted with artistic fingers. When he joined High School at0 St. Joseph’s SS Naggalama, he met friends with whom he shared the same burning interest. By the time he was in his fourth year at High School, all his free time was spent in the school’s Art Room. Seniors noticed his work, and casually complemented him. This meant a lot to him. At the end of his Fourth Year, Brian scored the school’s first Distinction in Fine Art in the National Examinations (UCE) in years. Needless to say, he continued with Fine Art throughout the rest of his High School.

When Brian joined the university, his father was hell-bent on having his son pursue any other career but Art. It was, in his opinion, “not a worthy career- did not pay well.” Brian pursued a Bachelors Degree in Petroleum GeoScience for four years. In his second year of study, his love for the art was reawakened by Neal Caffrey, a character played by Matt Bomer in the TV series White Collar.

“I kept looking at Neal’s drawings and thinking to myself: I can do this stuff! I’ve done it before; I can do it again. And so, I did it again!” Kawesa exclaims.

He started sketching drawings for his friends, for fun. With time, his talent birthed his love for Graphic Design. He sketched drawings and digitized them, a skill that helped him create logos, themes and flyers for a few private clients. When his PC crashed a few years later, he dropped the work. It wasn’t until November last year (2016) that the gift caught up with him.

Picking up the Pieces

“Towards the end of November, we had a Christmas gift sharing coming up at work the next month,” Kawesa remembers. “I thought of something unique as a present for my colleague. So, I decided to sketch a drawing of her & her wonderful boyfriend- with her prior permission, of course (laughs).”

The drawing made rounds at his workplace. Within a few days, what he had done as a present for a colleague turned into orders and orders. AND orders. The demand for the talent he was sitting on all this while overwhelmed him. He kicked out all prior fears he had had about not being “professional enough” because of not studying Industrial or Fine Art at university level, and decided to pursue it as a side career. Today, he earns enough to facilitate his work material (he creates his own glass frames too!) and is thriving to grow his talent.

A Sketch Art Piece by Brian Kawesa for a Client 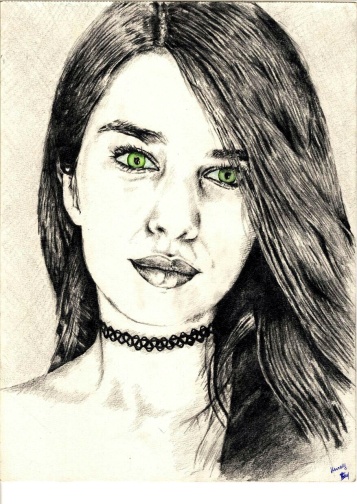 A Sketch Art Piece by Brian Kawesa for a Client

Brian isn’t entirely enthusiastic about his talent, though. He foresees lots of challenges ahead. He says Ugandans aren’t appreciative enough of art.

“In this digital age, people prefer colored photographs of themselves. It’s hard to get someone that notices the uniqueness of a monochrome sketch drawing. At most, what we appreciate about Art here is African Handicrafts. As a result, most sketch artists are demoralised. But I believe it’s all about practice. The more you do it, the better you get- provided you have the passion and belief in yourself. I personally believe that I can do anything with my hands if I put my heart to it, and that’s my daily prayer- for God to bless the work of my hands.”

Nevertheless, he’s still positive about his future in Sketch Art and Graphic Design. He believes originality, like creating his own frames as opposed to purchasing ready ones, and persistence will get him there, and would totally support his children (future children, that is) if they showed interest in the vocation too. 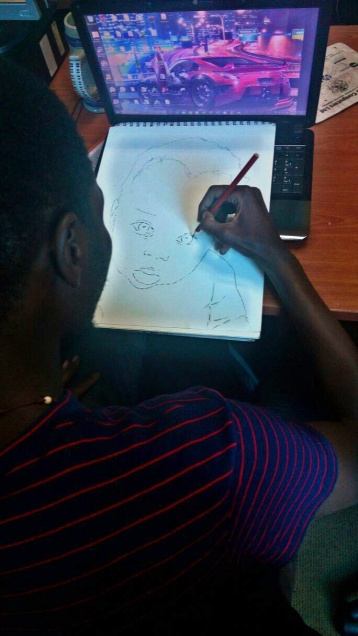 Brian Kawesa can be contacted by Mobile and WhatsApp on +256787611095, and Email on khaalybrian@gmail.com.